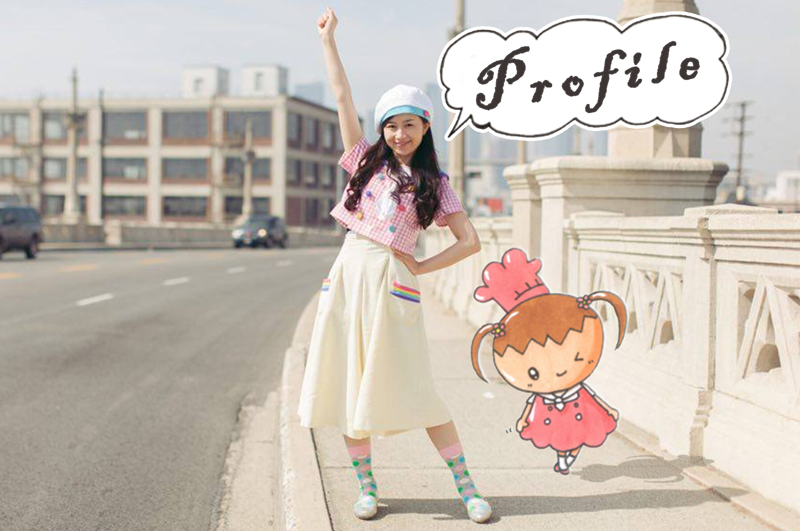 Hitomi Okada made her debut in an audition program on Nippon Cultural Broadcasting in 1998. She took time out from her busy schedule to start to create miniature clay foods in her own way.
With a passion for helping children develop a sense of creativity and imagination, Hitomi has held over 150 clay workshops for more than 10,000 people a year, writes books on artwork, miniatures, and dioramas, all while making appearances on children’s TV programs since 2002. Moreover, she has held workshops in various countries of five continents. Each time she goes abroad, she challenges herself to propagate the pleasure of creation by giving clay workshops for local children.
Her wide-ranging activities also extend to appearing in a Japanese tea ceremony books and DVD. She was given a tea ceremony master name ‘Sodo’ in 2017.
She appears regularly on the NHK TV show “Nyan-chu! Space! Broadcasting!”, acting two roles.

In 2002:
– Hitomi declared herself the first “Nendol” in history, adopting the title from the fusion of “nendo” (meaning clay) and “idol”.
– She did her first clay works exhibition at a gallery in Omotesando, Tokyo, and the exhibition set a new record for the gallery visitors.

In 2010:
– The number of parents and children who attended her workshops reached about 20,000, whereas Hitomi studied education.

In 2011:
– Hitomi visited the disaster-stricken area and hospitals to do volunteer activities after the Great East Japan Earthquake.
– She established “Clay Day” on September 1 every year (the numbers “901” are pronounced as “ku-re-i” in Japanese) and the day has been registered by the Japan Anniversary Association.

In 2012:
– Nendol’s 10th anniversary exhibition was held.
– Her clay work appeared in a leaflet of the world’s beloved and renowned “Play Doh” clay, which is available at Toys”R”Us in Japan.

In 2014:
– The Chinese version of her book was published in Taiwan.
– She supervised the product, “Play-Doh Starter Set” (Japanese edition).

In 2015:
– Hitomi started to write articles regularly for the magazines of KADOKAWA.
– She visited New York to observe art education programs and held clay workshops in English.
– In November, she was invited by Indonesia Comic Con in Jakarta as a special guest.

– Since 2016, she has designed yearly mascot characters of a fortune cat and oriental zodiac of the year that are attached to New Year’s rice cakes made by Echigo Seika, Co., Ltd.

In 2017:
– Hitomi appeared on the NHK’s special stage with popular characters and it drew tens of thousands of audiences. The DVD & Blu-ray of the stage came out.
– She joined TEAM LOFT that supports and offers events at Ginza Loft in Tokyo.
– During the summer, her 5 clay works were shown at the “Arcimboldo” exhibition in National Museum of Western Art, Tokyo. It was quite unusual for the museum to exhibit works by a living artist.
– The clay work “giant squid” was shown at the “Shinkai 2017 (Deep Ocean)” exhibition in National Museum of Nature and Science, Tokyo.
– In October, a clay picture book “Nendol Cat Hitomy’s Magic Restaurant (Gakken)” was published through the first collaboration with Satoshi Iriyama.
– In November, Hitomi had her exhibition in commemoration of Nendol’s 15th anniversary.

In 2018:
– More than 10 thousand visitors came out to see her exhibition at Postal Museum Japan.
– Her clay works were shown at the national traveling exhibition, NHK Heart Exhibition.
– She regularly held “Science Clay Workshops” with Prof. Katsuhiko Shirahige of Institute for Quantitative Biosciences, the Univ. of Tokyo.
– Her works were adopted as the designs of 15 New Year greeting cards that were produced and sold by AEON malls nationwide.
– She delivered a successful presentation, “Nendo and Being a Weirdo” as a guest speaker for TEDxGKA. (*The first full English TEDx event in Japan)

In 2019
– The 12th clay works exhibition was held at Narita Cultural Art Center in March.
– Hitomi introduced how to make clay works in a childcare magazine from April.
-Hitomi’s clay lessons is now available on the child safety app “NHK KIDS”.
-International tie-up with an academic conference in Vienna.
Her clay work inspired by “chromosome” was featured in an advertising poster and website of EMBO.
-Published 3 new clay craft books.
-Launched an educational clay kit combining clay work and shape memory alloy.
-Participated in the 1st Nippon Matsuri in Los Angeles.

In 2021:
– Hitomi was featured in the cultural section of the Nikkei newspaper.
– Made clay works based on a folk tale for a children’s magazine.
– A solo exhibition at the Postal Museum.
– Published videos of the making of clay works on YouTube.
– Offering online lessons for children in Japan and New York. 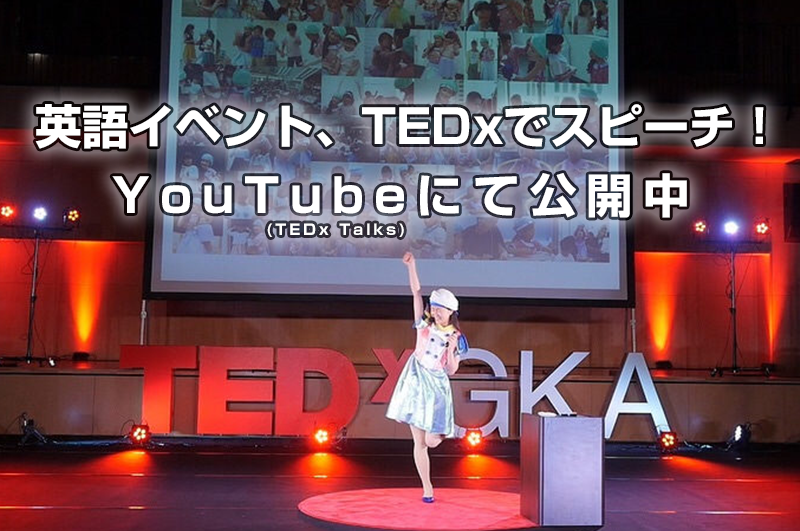 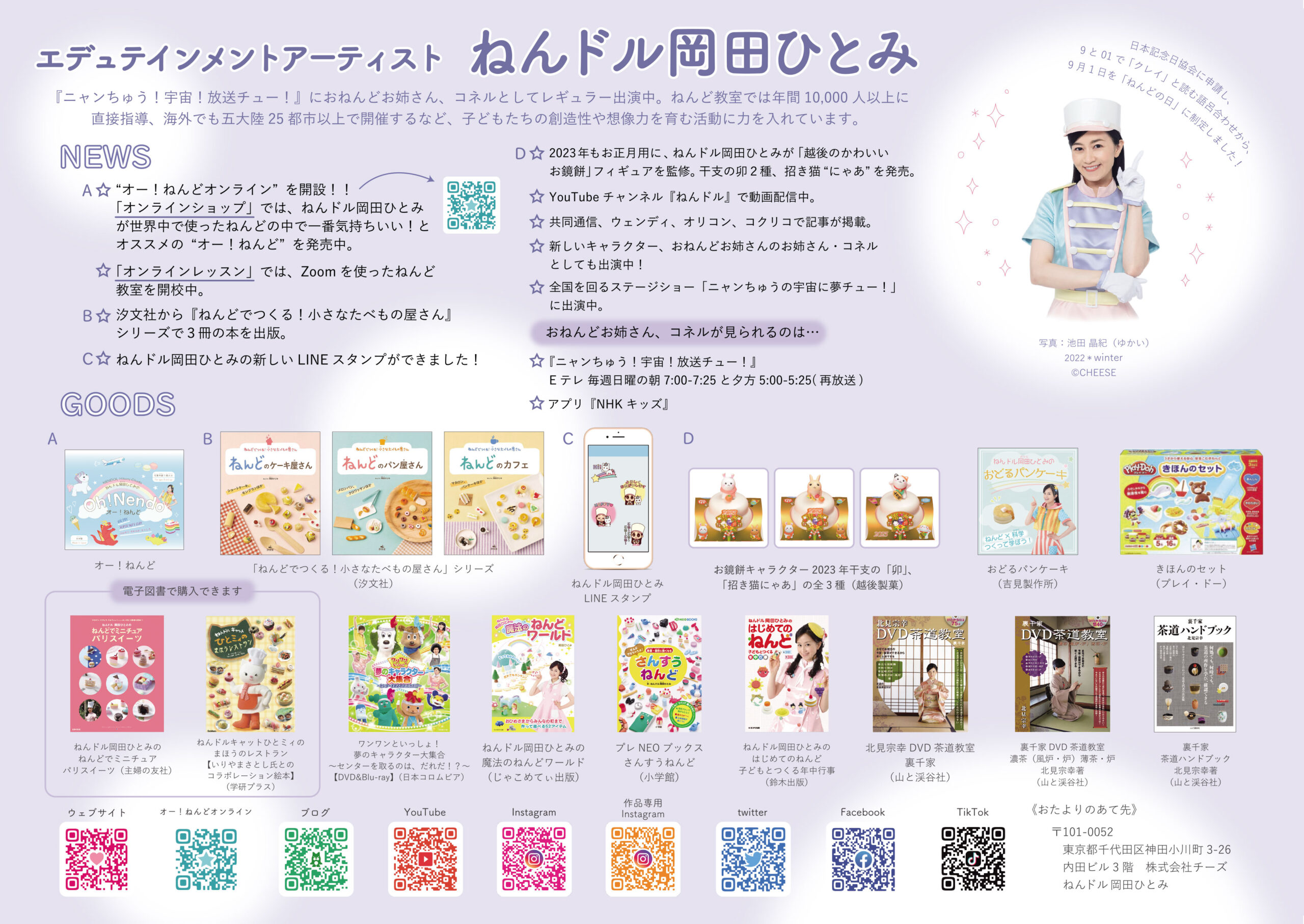